Yarn Dominance
Do you have a yarn dominance gene? We all do…some worse than others. Yarn or color dominance is a bit of a mystery that refers back to the way you hold your yarns.

Here‘s the deal… depending on how you hold your yarns, one color will be more prominent then the other. You may not see this on a single round…but over a few rounds, it can be very obvious. I say “can be” because this prominence can be very obvious in some knitters and not so obvious in others. Here is an example in a swatch I did for a beginning stranded class…. 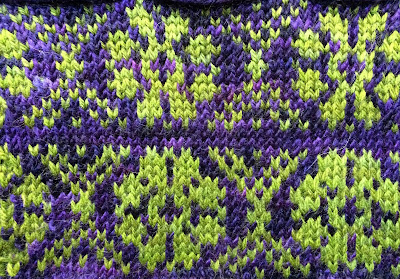 For the bottom panel, I held the background yarn (purple) in my right hand and the pattern yarn (green)in my left. For the top panel, I switched. Pattern in the right and background in the left.

I think my outcome is about average. I have seen dominance swatches where there is a big difference between the two. 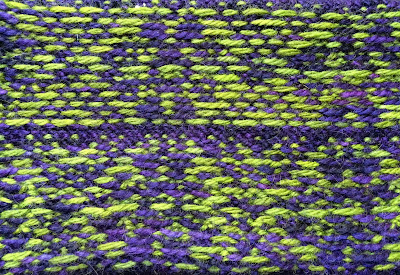 There are lots of explanations out there…but I have been trying to think of a way to describe it so it is easily understandable.

Ok…try this…take two fingers…your index and middle finger will do…and stick them out with your palm down…as if you are going to poke someone in both eyes...Three Stooges style.. These represent the two yarns coming off of your knitting round.

They are both on the same round, so they are level with each other…but they cannot stay that way if you work with them, right? Think of knitting the first “yarn”…then think of knitting with the second “yarn”. This second yarn cannot occupy the exact same space as the first as it travels to work the second stitch…it has to either go above or over the first yarn….or under or below it.

To represent this, turn your hand so your fingers are vertical…like you are pressing a door bell with both fingers…with your thumb on the top.

By turning your palm to the right or left, you change which finger is on top.

Now, line your top finger with the edge of a flat service, like a counter top.

The edge represents the needle with stitches. You will notice that the “yarn” on top has a very short distance to travel to get to the “needle”….while the “yarn” on the bottom has a fraction of a bit further to go to reach the “needle”. It is this extra distance that causes a slightly larger stitch…making stitches created from the lower yarn more prominent.

For years I either didn’t know this yarn dominance thing happened…or didn’t really care about it…or didn’t really think that it applied to me and my knitting…until I was taking a mittens class in which the instructor was working along with us on a stranded mitten. I had asked a question which involved her showing me her work…and it hit me…exact same yarn, exact same pattern…yet her mitten was more yellow (or white…I forget which) than mine.

So I started to read about it…but the over/above under/below stuff lost me. I was a two handed stranded knitter. What did I know of over under above below. I used one hand or the other…and generally put the color with the most stitches in my right hand (since I started out as a western knitter). I just didn’t get it.

Finally, the head smacking moment arrived and I got it. It is amazing how you read something enough times and it will finally make sense. I also could finally translate the over/above, under/below thing to the two handed method. The yarn in the left hand is the under/below yarn…the yarn which will dominate….and since I generally want the pattern to be prominent, I put the pattern yarn in my left hand and the background yarn in my right.

The final revelation came when I read that the obviousness of the dominance is a sliding scale. So the knitter with the minimal difference between the two won't see what all of the fuss is about...until you see a swatch where there is a huge difference.

Bottom line, though, whether you understand all of the explanations…my two fingers on the edge of the counter included…the one thing that rang true for me was to be consistent. That is all you really need to know in the end…be consistent.

How dominant is your yarn dominance gene? Leave a comment.

Next week: Creating stitches for sleeves and/or ribbing